“She didn’t stand much of a chance in life. A fatherless childhood, minimal education, a life spent on the margins of poverty, and later, a guy she loved, who said he loved her, but who ran away years ago after making her pregnant. With a young baby, the moneylender debts spiraled out of control but people told her she was beautiful, and almost inevitably she headed down south to the neon bars of Phnom Penh…..and an endless line of preying assholes. Foreigners mostly; ‘fucking barang’ she calls them.

There is a price to pay for fake smiles, fake hugs, fake kisses, and fake loveless fucks.

She started cutting herself finding that physical pain can blunt the shame. Then came yama pills, and later ice, sometimes mixed with heroin. Her looks faded, her teeth began to rot so she began to work in the darker streets and clubs.

Now she has HIV. All she ever dreamed for was a guy to hug her and protect her.”

Jonathan van Smit is a 67 year old photographer from New Zealand, now living and working in Hong Kong. He is emphatically not a photo-journalist, and primarily takes photographs to help explore and understand this world of ours. Economic marginalization and broken dreams are key interests. One area of focus over the last 3-4 years has been drug use in Phnom Penh, and the rapid growth of amphetamine-type stimulants such as meth (ice), as well as heroin. “I met up with Adda again yesterday, and took some pictures while she smoked ice with her friend. She had a baby boy three months ago. Laughing, she said she didn’t know if the father is a local guy or ‘fucking barang’.

We caught a tuk tuk over to Street 51; she gave me a quick hug, and walked off into the sunset to start the day’s work.

She was beautiful once.”

Jonathan started by walking the streets, and slowly built up some contacts, fixers if you like,(drug using bar girls, tuk tuk drivers, etc). A key fixer was a guy called AK who is a drug dealer and pimp. He used to be a child soldier in the Khmer Rouge in the late 90s, and used to cradle his AK47 as he slept, hence his nickname. Some of the photos were obtained by walking into derelict buildings, girlie bars, and then many were taken at AK’s parties or trips to KTV bars in Phnom Penh. “Lao opium very good, Cambodia opium no good” she said, holding up a little cellophane packet with blackish/brown gunge inside. “Have ice too”.”

More pictures of Jonathan van Smit can be seen on his Flickr-Album: 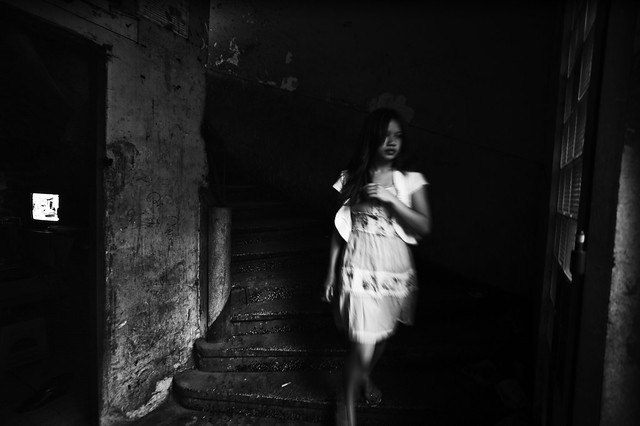